Anyone who has used the std::vector class in C++ should be familiar with the concept of iterator invalidation.

In general, when iterators are invalidated, any pointers into the range will be invalidated also, so I'll use the terms pointer and iterator interchangeably (iterator invalidation just has a certain ring to it. It's an Attractive Alliteration).

Wouldn't it be convenient if we didn't have to worry about iterator invalidation? We could have elements in a vector that hold pointers to other elements in the vector, pass pointers and iterators around willy-nilly, and live without fear of the dreaded nasal demons. What would be required for that to work? Well the problem is that the address of the block of memory we are using changes right? So we just need to make sure we always use a block of memory which starts at the same address. But there's a problem with that, we need to do other allocations, and besides, we're not the only program running on this machine, someone else will grab the next bit of memory after us and we'll have no room to expand. Well, enter...

We can use virtual memory to present a fragmented series of blocks of physical memory as a contiguous block of memory in virtual address space.

So we start with an initial block of memory mapped to some physical ram, then when we need more we just map some pages at the end of that block's virtual address space?. We still have a problem here, how do we stop malloc and friends from using the virtual address space immediately following our block? Well, we can reserve pages. And here's where it all comes together: these days, we're all using 64-bit operating systems. that gives us enough address space for 16 exabytes of ram. I don't know about you, but I haven't got *nearly* that much physical ram in my system (hi 2050, I hope that sentence aged badly). 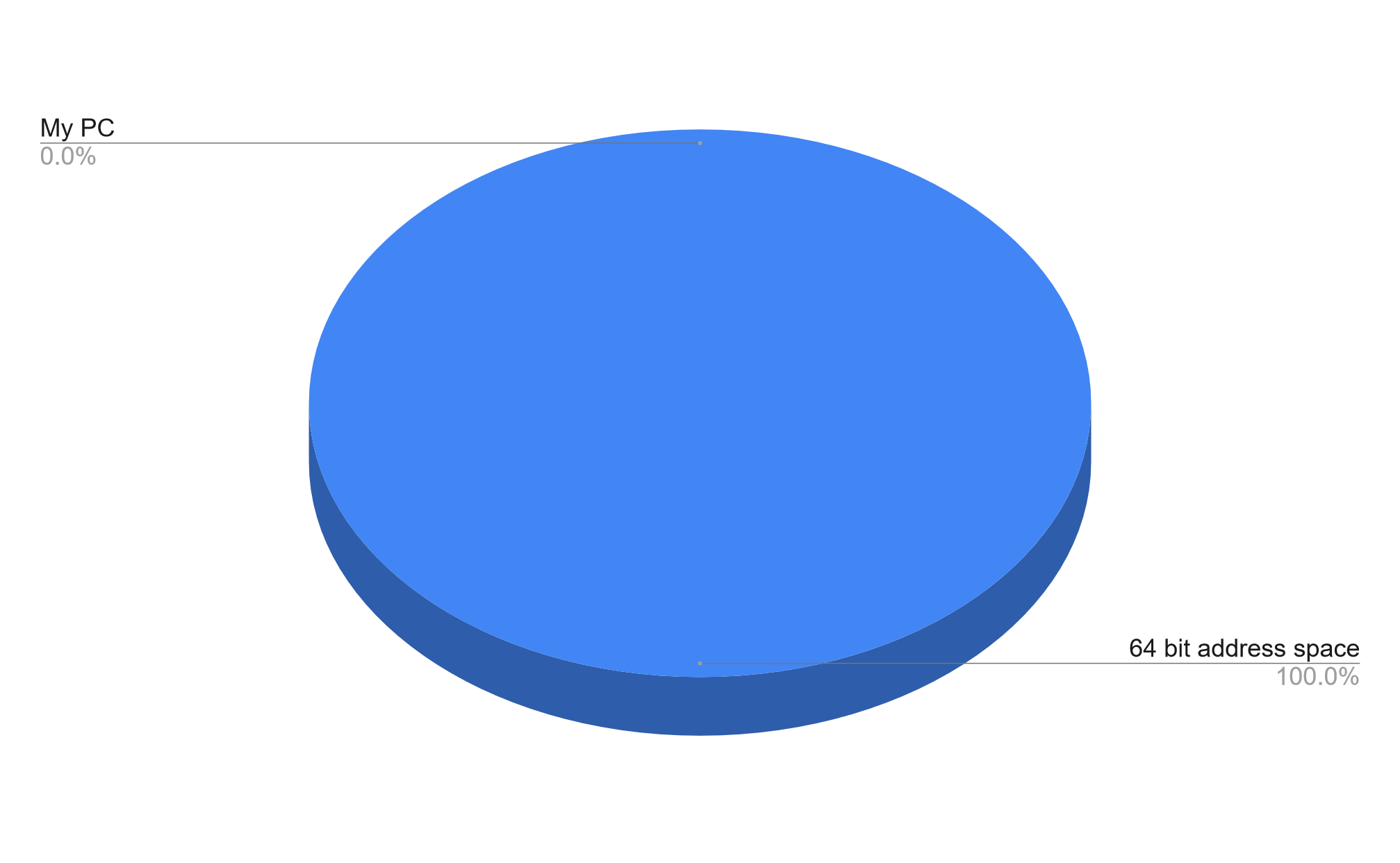 What we can do is reserve a huge chunk of address space, way bigger than we could possibly need, say a whole terabyte. Different OSes have different ways of doing this, but at least Windows and linux do allow it (side note: I really enjoyed reading the Windows memory management documentation pages. The page on VirtualAlloc2 has a pretty cool example of using virtual memory to implement a ring buffer that blew my mind when I first read about it). Now the rest of the system will leave our huge chunk of virtual memory alone, and we can map and unmap pages inside that range as we see fit.

So, that's about it. We use the OS-specific memory management utilities to set things up, and wrap it into a trio of allocate, reallocate, and free functions, implement a basic copy of std::vector on top of that, then push_back() to your heart's content. But there's one last extra bonus...

When a traditional vector class reallocates, it has to move the old data into the new storage. Depending on what the vector is storing, this can get quite expensive. Even if it is just storing plain old data, copying all those bytes gets slow when the vector is large. With pinned_vec, we don't need to do that, so we should see a performance gain. 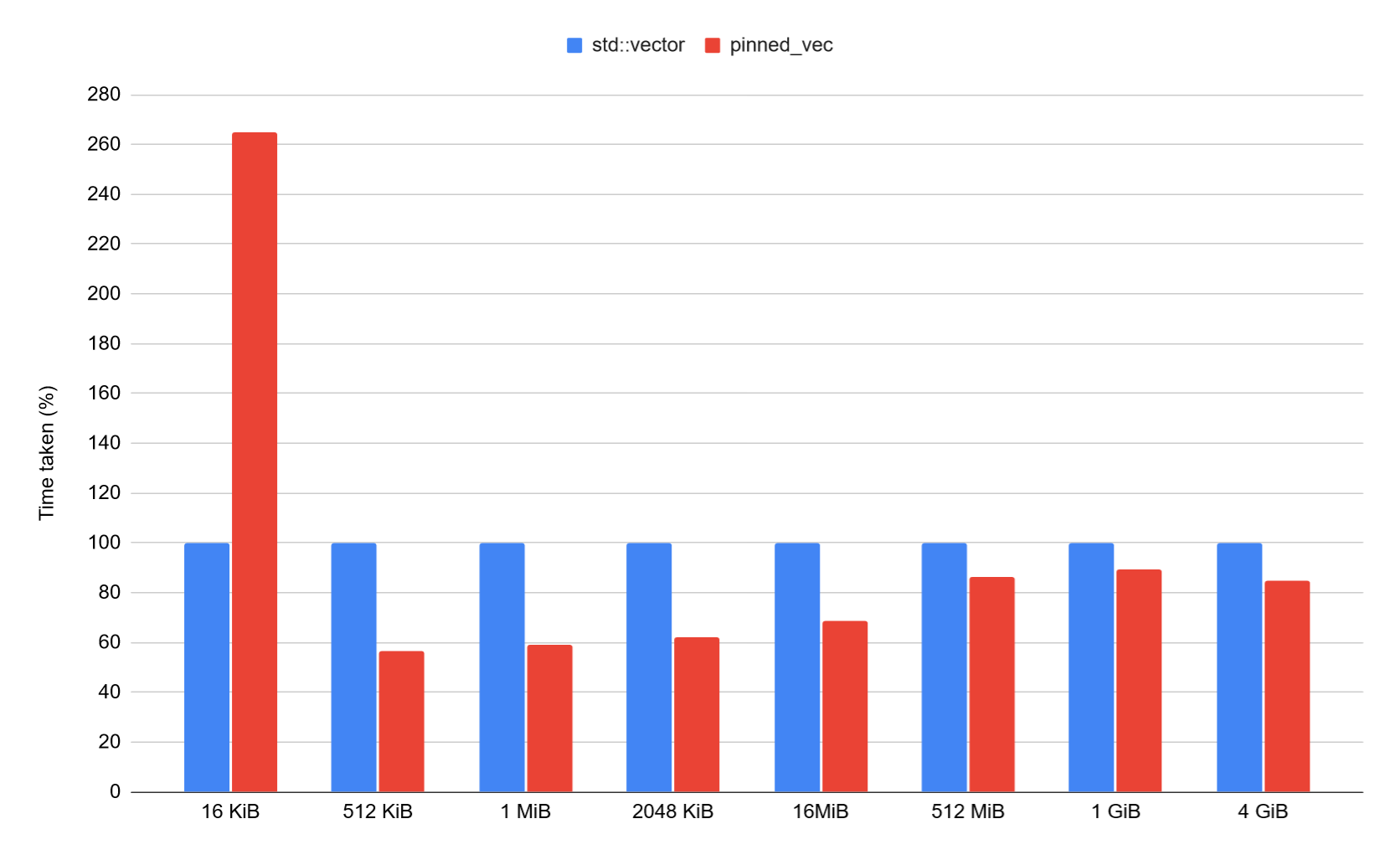 Benchmark of growing a vector of ints to specified size, on Windows 10.

At smaller sizes, the std::vector wins out, but for larger vectors the pinned_vec lack of a need to copy takes over. Interestingly for the larger sizes the percentage lead starts to slide, maybe Microsoft is doing some similar optimisation inside std::vector at large sizes? Testing on linux I didn't see this, the pinned vector gained a substantial lead around 512 KiB and then kept it as far as I tested.

So should I actually use this thing in production?

1: Ok, it uses some memory to store the page table, shoot me.